Having just re-watched Episode One, I thought I'd share a few observations with you all.

Meg Jackson
Meg is quite cold and harsh in the opening scenes of this episode and it's not at all in keeping with how she is later perceived. She is very terse during Karen and Lynn's induction and doesn't help Lynn's tearful state at all. Indeed, she seems inured to it. At one point, Lynn is protesting her innocence and Meg cuts her off without a second thought and explains that she will have a chance to explain that to the Reception Committee later on. And this is the nicest of the screws!

Karen Travers
Karen Travers' situation is an interesting one, I think. Judging by her reactions inside Wentworth, it's pretty clear that she is completely new to life inside and yet she's just been on trial for murder. Does this mean she was bailed and if so, on what basis? She refused to give the police any explanation about why she killed Wayne and kept all knowledge of the way he abused her to herself, so I can't see the police - or the courts for that matter - giving her bail. The facts as presented by Karen were that she killed her husband. Carol Coulson, who pretty much did the same thing, was immediately remanded to Wentworth, so shouldn't the same thing have happened to Karen. And yet it is clear that she had her trial first and then was sent to Wentworth.

Another interesting thing about the Karen situation, I think, is that she didn't have to serve the compulsory 24 hours in Solitary. This, again, seems to indicate that Karen must have already been through this in another prison ... and yet all evidence points to the contrary. She is completely shell shocked by life inside and I don't think she would have been if she had spent some time on remand in another prison or similar facility.

Erica Davidson
Erica comes across as extraordinarily strict and somewhat ill-equipped to deal with the day-to-day running of a prison. Karen is brought to see her, complaining about Franky having 'touched' her and Erica berates HER and says she will not be granted another interview to see her on such a trivial matter. And this is despite the fact that Franky's predatory nature and reputation for bullying is fully known to her. Karen is a new prisoner and clearly easy prey for someone like Franky and yet Erica seems not to regard it as bullying.

Later on, Lynn is brought to see her after having had her hand steamed and pressed by Bea. Erica should be outraged by this obvious sign of bullying and yet what does she do? She asks Lynn if she had done anything to upset Bea! No matter what Lynn had done to upset Bea, surely having her hand burnt in the press is still an extremely serious matter and should have been handled without a cross-examination. Lynn hadn't even been to see the doctors at that point, as Erica sends her there after the interview. So, strangely, Lynn is in agony with the burn on her hand and instead of being taken to seek medical attention, she is instead taken to see Erica ... who then basically implies that she may have done something to deserve it. Odd behaviour from Erica here, I feel.

Bea Smith
We learn that Bea is due to be paroled the following day, so why the hell did she burn Lyn's hand and put that parole in jeopardy? Bea is desperate to get out and impose summary justice on her dear hubby and yet she decides to teach Lyn a lesson. Now Bea has already planned to return to the prison after killing her husband, as we learn in the following episode, so why not just wait until she comes back to sort Warner out? It's not as if Lyn had actually challenged her position or there was any rush. In fact, the Bea in later episodes would have either waited her moment or got someone else to do the dastardly deed, thus assuring her parole without the need to bribe Anne Yates and take the risk that Lynn wouldn't be stupid enough to lag on her AND Yates.

Procedural Oddities
At this early stage in Prisoner's run, Wentworth had a full range of extracurricular activities. Studying, Pottery, cooking and gardening. In later episodes, we also see a dance class and a keep fit class. As we know, though, these activities are very much a flash in the pan and they soon disappear altogether.
As mentioned above, there is a Reception Committee who deal with the prisoners' problems and allocates them work duties.

Facts, Figures and other Episode One Related Trivia

Eddie Cook replaces a Handyman named Fred
Franky Doyle and Karen Travers have life sentences, Lynn has been sentenced to 10 years for kidnapping and attempted murder and Marilyn Mason has another 6 months to serve.
Greg Miller has been coming to Wentworth twice weekly for the last two months.
Mum Brooks has been in prison for 15 years and is a Trustee
Sally Lee commits suicide in this episode.

Cliffhanger: Bea intimidates Lyn in her cell, clamping her hand over her mouth and snarling: "Shut up!" 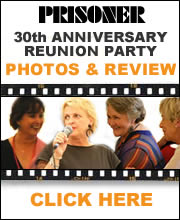